Changing it up in August! 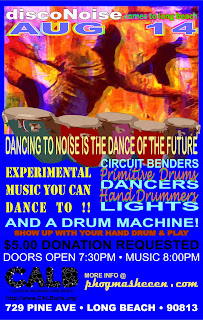 After a splendid show with Phaul & Skunk Puppet and dancers Edgar and Deseree we are moving on to the third and final discoNoise of Summer 2015!  In another inovative twist, we are inviting hand drummers to pack up their djembe and come on down and jam with us. More beat = more fun!
Performing in August, circuit bender Potar, modular synthesist Jorge Martin and phog masheeen!
Come on down and join in the fun!

Posted by phog masheeen at 3:12 PM No comments:

There has been a change in the lineup to discoNoise tomorrow. Emily Hay will now be joining us.
You can check out Emily at her web site: http://www.emilyhay.com/ 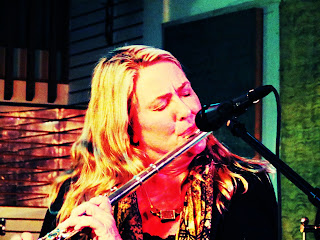 The second installment of DiscoNoise, a three-part summer series of sonic events featuring an adventurous program of music and dance beats created by “noise artists” for your curious ears and toe-tapping tendencies, will take place on Friday evening, July 10.
Bent circuits, plug-ins, sine wave generators and video projections will fill the Bungalow Art Center on Pine Avenue for all those interested in an evening of experimental sound.
Sonia Fierce of GataTECH, who discovered the open-ended universe of electronic music while taking classes to learn the recording trade, will be taking the stage during DiscoNoise.
With a background in punk rock and her self-described "mad scientist" inclinations toward her musical art, Fierce breathes new life into thrift store toys by re-wiring their circuits to make strange new sounds, which become the building blocks for musical structures made with live sampling and manipulation to build her set.

Mark Soden, DiscoNoise’s organizer, explained the science and art of circuit bending, Sonia Fierce’s specialty.
“Circuit bending is the craft of opening a noise-making device such as a child’s toy and soldering jumper wires on the circuit board to get it to malfunction in interesting ways or ‘glitch,'" he said.
Skunk Puppet is a Long Beach local immersed in the all-digital realm of sound production. Using a collection of myriad applications, plugins and digital audio workstations, this noise artist’s act is a combination of performance-based composition and algorithmic layers.
“One of his mainstays is a software that filters sound through a virtual trachea," said Soden. "This lends a vocal or animal sound to his work. However, the virtual trachea offers attributes that are not found in the animals on our planet. So in many cases these are animals you have never heard before.”
Another local to Long Beach, performer Phaul rescues sine wave generators and other electronic test equipment to use in ways they were never intended. According to the announcement, “these tools produce amazing sonic results that will blow your mind.”

This event will be staged at the Cultural Alliance of Long Beach “Bungalow Art Center,” 729 Pine Avenue. Doors open at 7:30PM, music begins at 8:00PM. A $5 donation is requested, however no one will be turned away for lack of funds. For more information and performer interviews, click here. The next and last Disco Noise will take place on Friday, August 14.
Images courtesy of GataTECH and Disco Noise.

Posted by phog masheeen at 2:19 PM No comments: