The Santa Ana Noise Fest 7 was glorious fun!  A convivial supportive crowd in attendance! Great Sets all around.

William Almas supplied amazing visuals for many of the acts!

My gear wanted a more aggressive  set, so it made one. I am feeling even more distantly involved in the proceedings. I am in a mood to take it all apart and rebuild it again. After spraying it down with contact cleaner.

Now I am done  complaining about my gear.

Posted by phog masheeen at 5:59 AM No comments:

Minor change to the line up for Santa Ana Noisefest 7....

There is a minor change to the line up. I traded with Virons.
Don't forget to RSVP to get in FREE!
Do that here: https://www.eventbrite.com/e/sanf7-santa-ana-noisefest-7-tickets-18659206188?aff=eac2

Go where the gear takes you...Some notes on performing at La Cita Bar.... 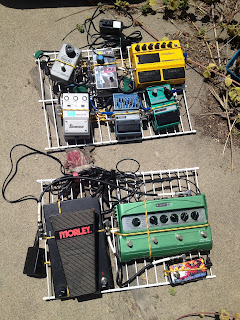 The noise genre has alot to do with gear....as such...I made an odd decision a while back that has continued to guide my performances today.
A couple years ago I performed at the Dung Mummy in Jawbone Canyon, out past Mojave. The weather was harsh and as it turned out I performed in a downpour of rain. Sheets of rain. Horizontal rain. Rain like a firehose. I saw water cascading off my samplers and mixer onto my pedals below. The event is presented in the video Phog masheeen live Jawbone Canyon 4-25-2014, The Edge of Electrocution. Available for your perusal here.
https://archive.org/details/PM_Jawbone_4-25-2014

Some notable attributes of that performance were, which devices failed and when they failed. The photo at the top of this post is the gear drying in the sun. After which, I placed it in plastic bags with white rice to draw out the remaining  moisture.

The key point here  is this is all the gear that I still use now. It is not the same as it was before the rain and it has developed some issues about what it will and wont do. Stated differently, it has not and will not forgive me for my lapse in judgement.

I was reminded again at La Cita Bar that the gear has a will and direction of its own. I tested the gear at home and was confident that all was well. I have seen this ruse before and have fallen for it before.
As the show at La Cita progressed the sampler stopped filtering external sources. It didn't stop. It just stopped filtering. It passed the signal unfiltered. The pedals jumped in on the fun by developing a hair-trigger attitude about all their functions. As if they were bad employees that had a mindset of "you want more gain, I got your gain! Right Here!" Clearly the mechanical bull was off the pedestal and was trashing the bar.

So what was the take away from this event. Or this change of terms of employment of these devices.
Here is the list:

Planning is a myth. You may have an idea of what you would like. That will have no bearing on what is delivered.

The machines are more than equal partners. It is my job to transport them to the gig, provide them with power and beyond that they do what they want.

Finally, It can sound better if I get out of the way of my damaged goods and let them do their thing.

This is what happens when you don't replace the gear and watch as it ages and develops character.

Posted by phog masheeen at 7:01 AM No comments: