The Thrilling conclusion to the Bedlam Art Show is this Saturday 9-14-2013. Phog masheeen will be joining Emmy and Bean from Brutal Poodle to scorch the air behind the Radio Free Joshua Tree at 9:30 PM. If you are out that way check it out.

The two weeks later we are performing at the 29 Palms Creative Center for their Birthday party. That would be Saturday 9-28-13 After sunset (7:00 PM ish)

Rolling in after that is the Soundwalk in Long Beach. 10-5-2013.
Dr. Kaplan is bringing her Rubber Band Box Orchestra to the Soundwalk. I will be roaming around and seeking opportunities for sonic experiments.

The Swag has arrived!

As anticipation builds for the arrival of ShoutLand, the swag arrives. New buttons available only at live shows. You will want these!

Also check out the ShoutLand Back Story tab at the top of the blog to get the full narrative on Shoutland! 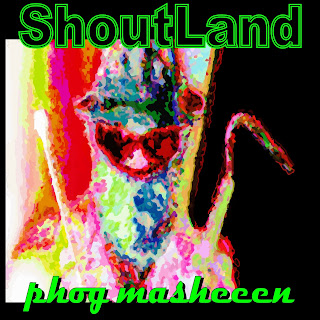 Here's a thread on the production of ShoutLand from FaceBook. Sorry about the lack of word-wrap.

Mark A. Soden Jr. Thanks Tim! We are ramping up for the new CD ShoutLand.

Tim Mungenast I wanna know all about it!

Mark A. Soden Jr. Ok, Here's the link to the back story http://phogmasheeen.blogspot.com/p/shoutland-back-story.html

Mark A. Soden Jr. The tracks were built from live recordings, rehearsals and studio work. The Sonorium performance is in there. I continued the the use of actors as vocalists. Focusing on character rather than singing. Thomas Dimuzio did a brilliant job of mastering. Bill Almas has produced an outstanding cover for the CD that ties in the "buzzing like cicadas" phrase and Vanessa LeFevre's cicada recordings are in there too! These recordings are how I spent my summer...

Mark A. Soden Jr. Bill did a trailer for an early mix of "I Want To Take a Shower." Lisa Black added a genius vocal to that. She developed a voice for the character Agatha that just says "homeless with a taste for drugs." That video is here http://youtu.be/7QsDQ6t9EcI

Mark A. Soden Jr. The first trailer is here: http://youtu.be/h6LCTKv3LGo Bobby Almon voiced this intro to the world of shoutland in a tone that evokes the voice of a weary crime reporter, laying out the facts.


Posted by phog masheeen at 7:03 AM No comments: