Another Flyer for June 17th! 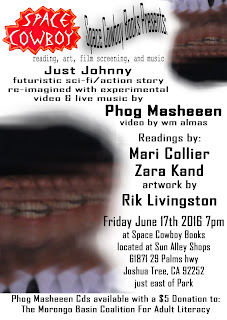 Here is the cool Space Cowboy flyer for "Just Johnny."

Fun and Free! It is the way we roll!
Posted by phog masheeen at 7:17 PM No comments:

The flyer is up for the Just Johnny screening in Joshua Tree... 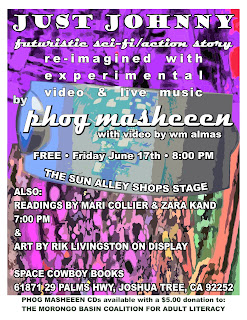 The great work thunders on as preparations are under way to bring our re-imagined William Gibson classic to the Sun Alley Shops Stage.

Phog Masheeen re-edits a sci-fi classic as a silent film and performs the soundtrack live. YOU can experience this at the Sun Alley Shops stage, For FREE on Friday June 17th at 8:00 PM.
There will also be a reading by Mari Collier and Zara Kand at 7:00 pm.
The address is 61871 29 Palms Hwy, Joshua Tree, CA 92252
Also Phog Masheeen CDs will be available with a $5.00 donation to The Morongo Basin Coalition for Adult Literacy.

Here is the public Facebook Event link....please spread it around...

The Silent movie remake of a Sci-Fi epic, The OC Fair! 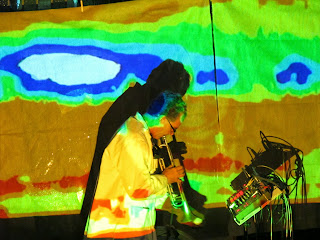 Upcoming for phog masheeen is a video/live performance event in Joshua Tree promoted by Space Cowboy Books. www.spacecowboybooks.com
For those of you who know my facebook rants, you are undoubtedly aware of a certain movie that I have watched repeatedly over a number of years. Think Howard Hughes and Ice Station Zebra...
The film in question was not a blockbuster or a cult film and these days has settled into light rotation on Spanish language channels.
What I saw in the film was what could have been an experimental film, was instead a poorly cut bloated event that featured all the bankable stars from the early '90's.
What if, that film was re-cut to one hour, moved like lightning and returned to its edgy experimental roots....as a silent film....with phog masheeen providing the soundtrack.

Don't forget! Phog Masheeen is coming to the OC Fair Saturday July 16th at 11:45 AM on the Plaza Pacifica Stage! Mark your calendar and come on down!

Posted by phog masheeen at 7:27 AM No comments:

Video of Jawbone Canyon show is up, Phog Masheeen to perform at the OC Fair!

Thank You William Almas for this astounding video to accompany the phog masheeen set at Jawbone Canyon for the 2016 Dung Mummy. Here is the direct link: https://youtu.be/Oh4Bx45dqHo

Thanks again Kirk and Glenn and all the wonderful people and performers that make these such special events!

On a different note....Phog Masheeen is confirmed for performing at the OC Fair Saturday July 16 at 11:45 AM at the Plaza Pacifica! Mark your Calendar and join us for the fun!

Posted by phog masheeen at 6:40 AM No comments: