Boston Recap, on to Wonder Valley! 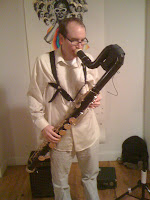 The trip to Boston was stunning in its greatness! We had the honor of performing with brilliant performers. We found dry-ice easily. The talk was spectacular.
Many thanks to Vanessa LeFevre for booking the trip and orchestrating the entire event.
The most humbling experience was meeting Performer, Instrument designer and all around great guy Eric Nugent. He spent a decade creating the NU (pictured here). The short version is that it is a Digeridoo with keys.
Let us ponder that information for a moment.
Ten years in development. Casting the parts. Doing the math to locate and size the holes correctly. Then learning to play it brilliantly! I would be stopped at the ten year development cycle. I might scrawl the idea on a note pad that I would eventually not be able to locate. But the patience and skill to design and fab an instrument is a different level of patience and commitment.
But wait there's more!
Eric also fabricated a double trumpet that was operated by Eric Dahlman, the other half of the Auddity duo configuration. This horn had two bells, two sets of valves, a dog toy squeeker mouthpiece. On of the possible configurations included inflating a balloon that could be made to push air through the squeeker. Amazing! Also they had a pan of water with a mic on it that they would submerge the trumpet bell in the water and create an aquatic almost motorboat like sound with it. For added star power they added ENO to the performance. In the form of the fizzing antacid, not the Music for Airports guy. 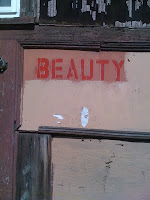 Walking on Mass Ave. provided some wonderful urban beauty as evidenced in this brilliant work of editing. 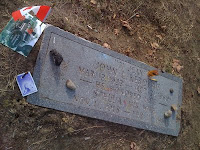 Also, since the 119 Gallery was located in Lowell, MA we visited the grave of Jack Kerouac. The city of Lowell has adopted Jack as a tourist attraction. Such that they named a 5K run in his honor. I imagine him spinning in his grave as healthy people run sweating in the streets of Lowell.
Lovely town Lowell. Home of RRR Records as well.
Moving on to next weekend. The Wonder Valley Experimental 3 rolls into the Palms.

There are some updates on this event.
Desert local, Piano Bob will be providing break music between sets with his legendary prepared piano! Bob is a local legend and some would say a national treasure! We are honored to have Bob as part of our line up.
Bob's history with noise is long and storied. He collected metal from illegal dumping in the desert and sorted it by sonic qualities.
This included larger pieces such as automobile gas tanks.
(Automobile gas tanks have a number of different bends and have a similarity to steel drums in that they offer a wide variety of pitches depending on where they are struck.)
Bob would bring his collection to local coffee houses for monthly "noise nights" where people were invited to jam on his collection of sonified metal.
His public piano project predated the character in New York that is desperately trying to claim it by years. That project included Bob pushing the piano on the side of highway 62 from one site to the next, where it would then be moored for the public to play till he pushed it on to another site.
I am looking forward to Bob's addition to the noise fest!
Posted by phog masheeen at 8:22 AM